This post describes how I built a vacuum dryer for my 3D printer filament; I also use it for drying silica gel.

DISCLAIMER: BUILD AT YOUR OWN RISK.  THIS PROJECT USES MAINS VOLTAGE (110/220V) AND WILL KILL YOU IF YOU MESS UP.  THIS IS FOR INFORMATIONAL PURPOSES ONLY.  DO NOT ATTEMPT THIS PROJECT.

PLEASE NOTE: I am NOT providing a wiring diagram for this project.  You require sufficient electronics skills to confidently and correctly assemble the parts described on your own.

ALSO NOTE: The 220V components used in this project have NO GROUND connections, so in my version of the project I grounded everything and everywhere I could think of.

I need this because (at the time of writing) I live on the coast of east Africa, where the humidity can be high: 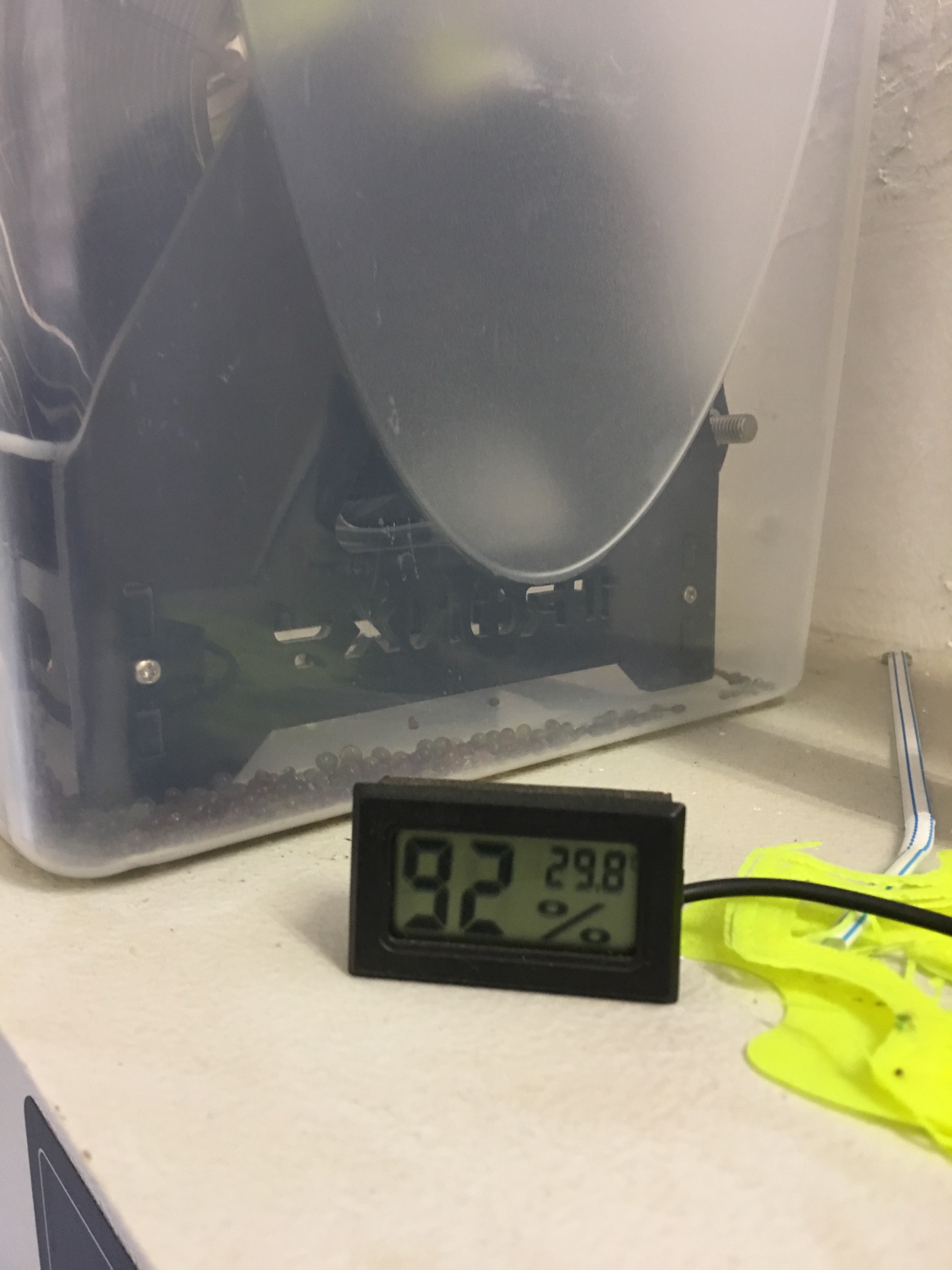 Here is the layout of the base, before I added the second thermostatic control switch: 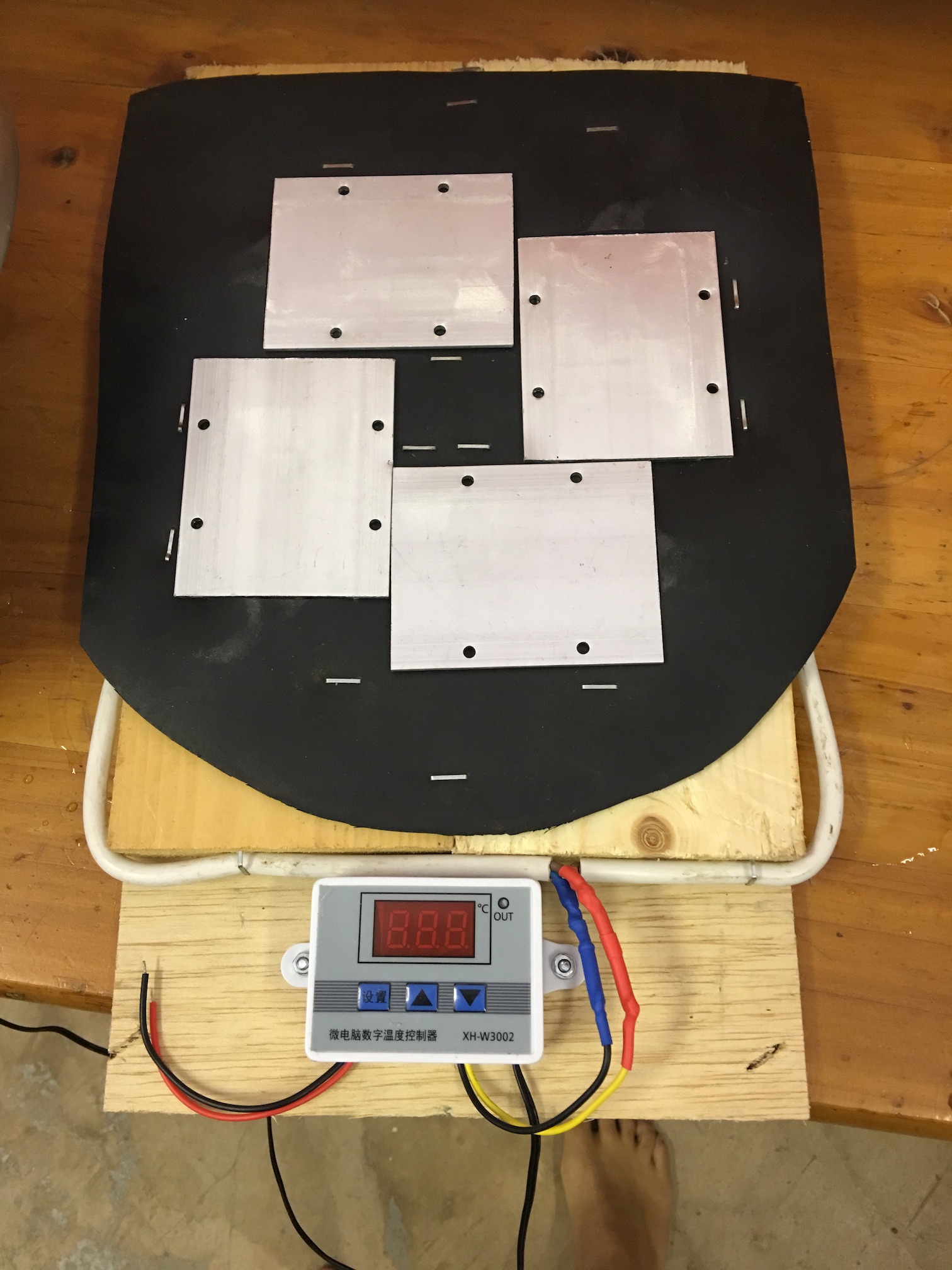 Probably hard to tell from the photos, the heating units have a raised section and a larger base plate with mounting holes.  I’ve cut holes in the rubber sheeting for the raised sections to fit into. 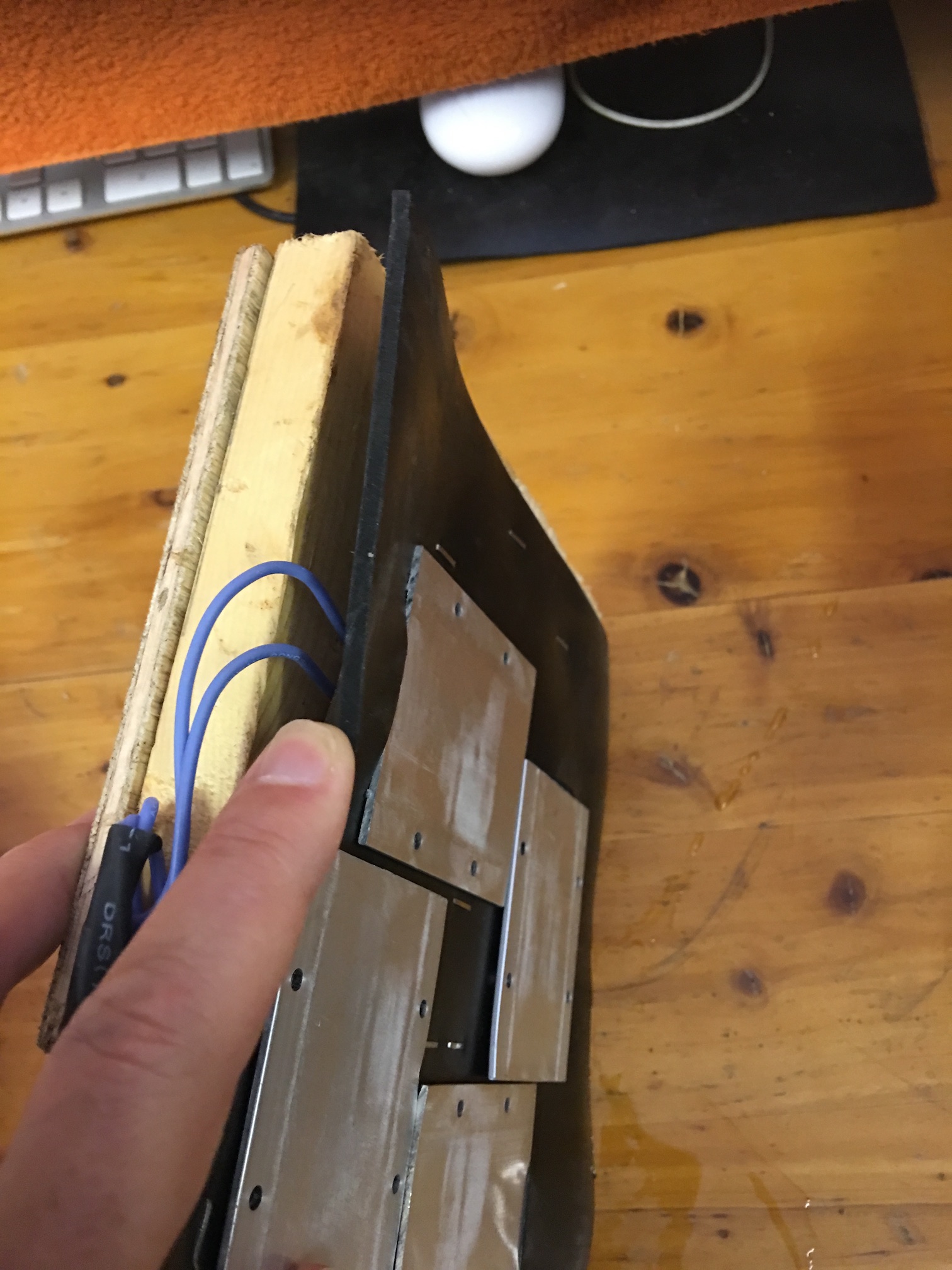 Here’s the pumps so you know what to look for on eBay: 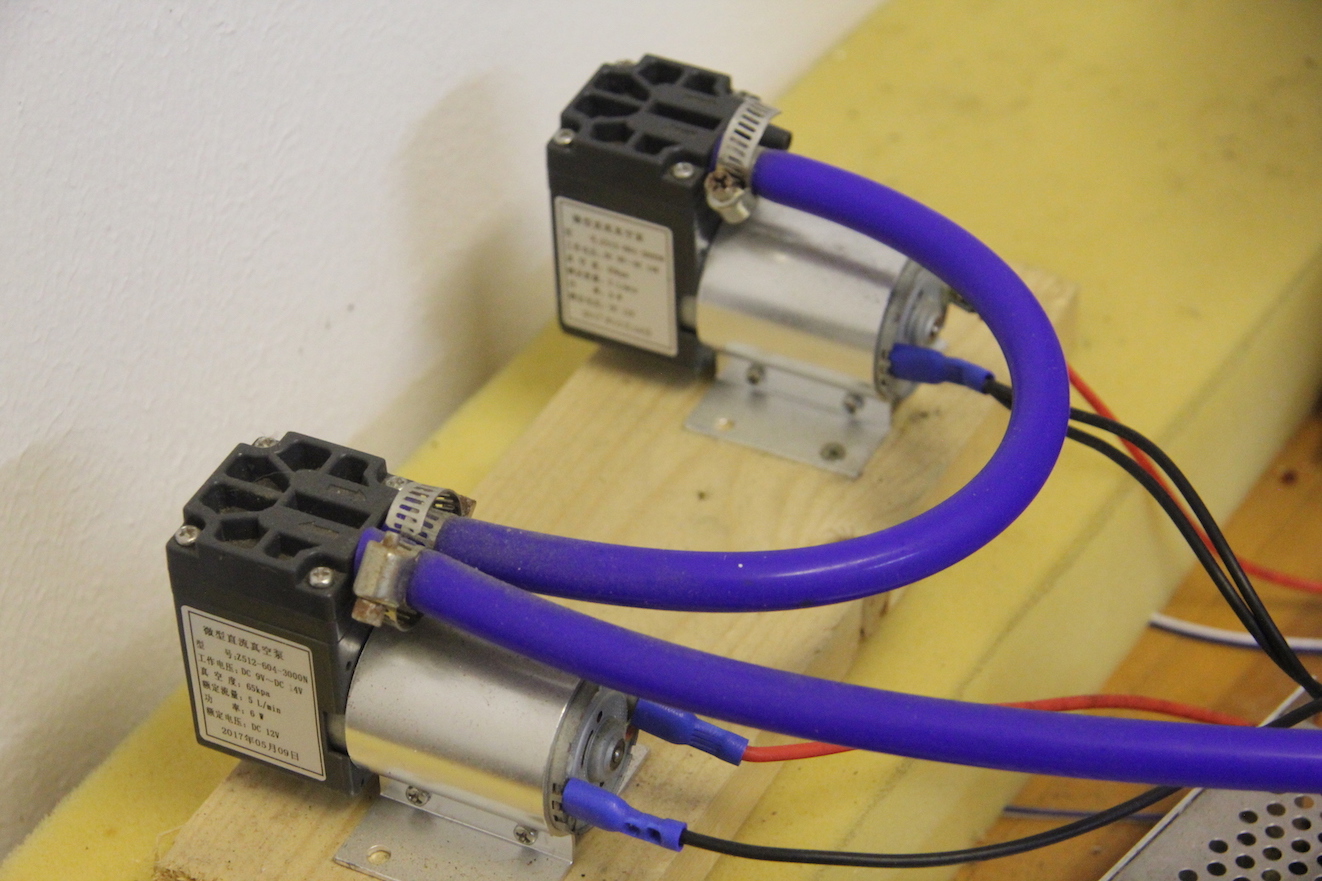 See the photo at the top of the post for the big picture layout and the routing of the vacuum tubing.  Also see the v2.1 photo further below for some heat shielding added later.  (v1.0 used a weaker pot which collapsed under the vacuum) 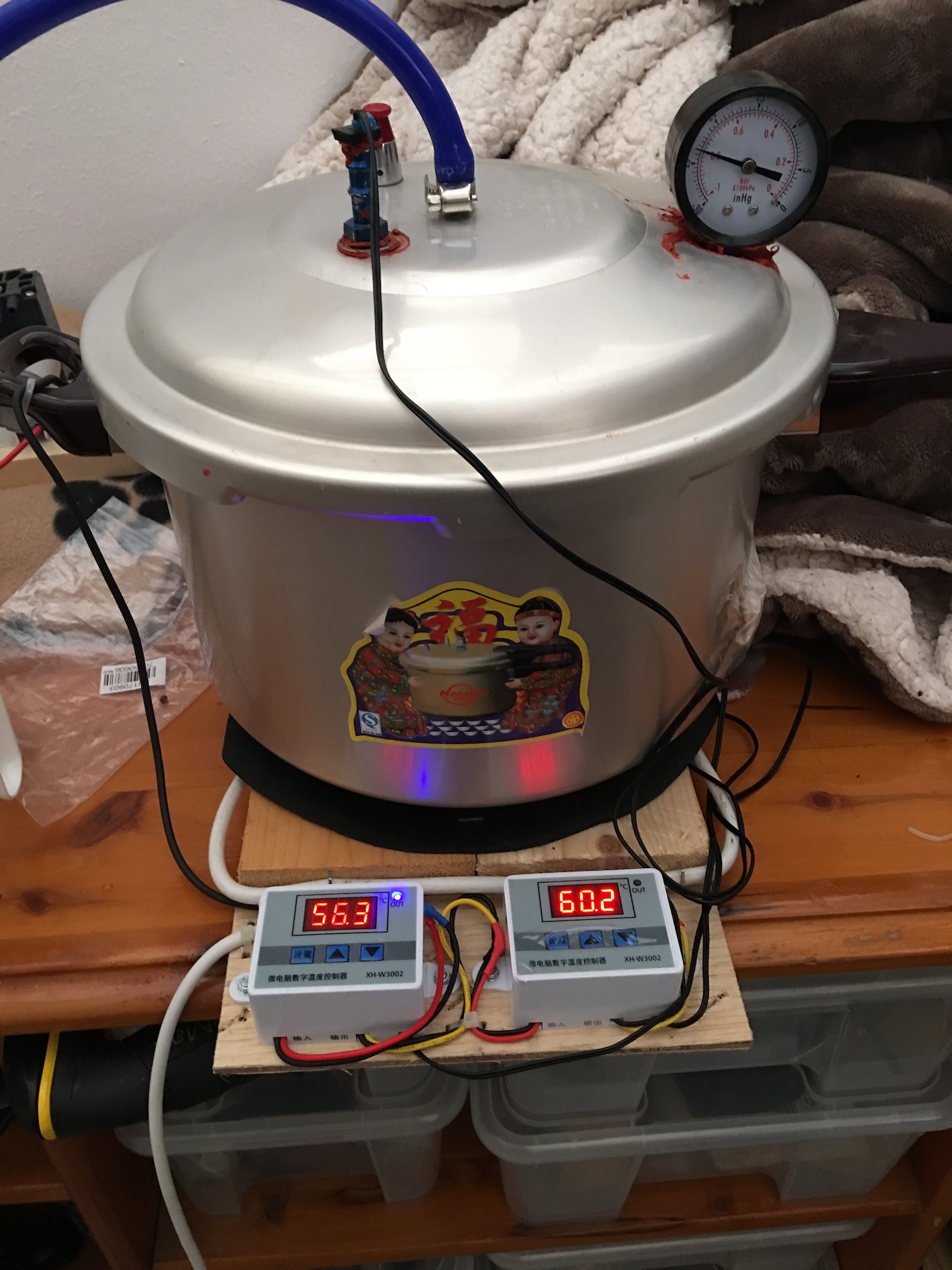 Above the main device in action.  The sensor for the thermostatic control on the left is taped to the outside of the pot, while the one on the right goes through a silicone sealant filled tube and a plastic tube inside to the middle of the space.  Note the readouts: the outside is at 56.4C and power is enabled (blue light), while inside is warmer (60.2C) which is over the cutoff so power is disabled.  The thermostatic controls are wired in series, so both must be on to get power to the heaters.  There is a lot of hysteresis in the system, so just having one sensor could easily exceed target temperatures by 10C or more.

I use a blanket over the system to trap heat inside while it is running.  You can see this in some of the photos.

Here’s some more views of the top lid: 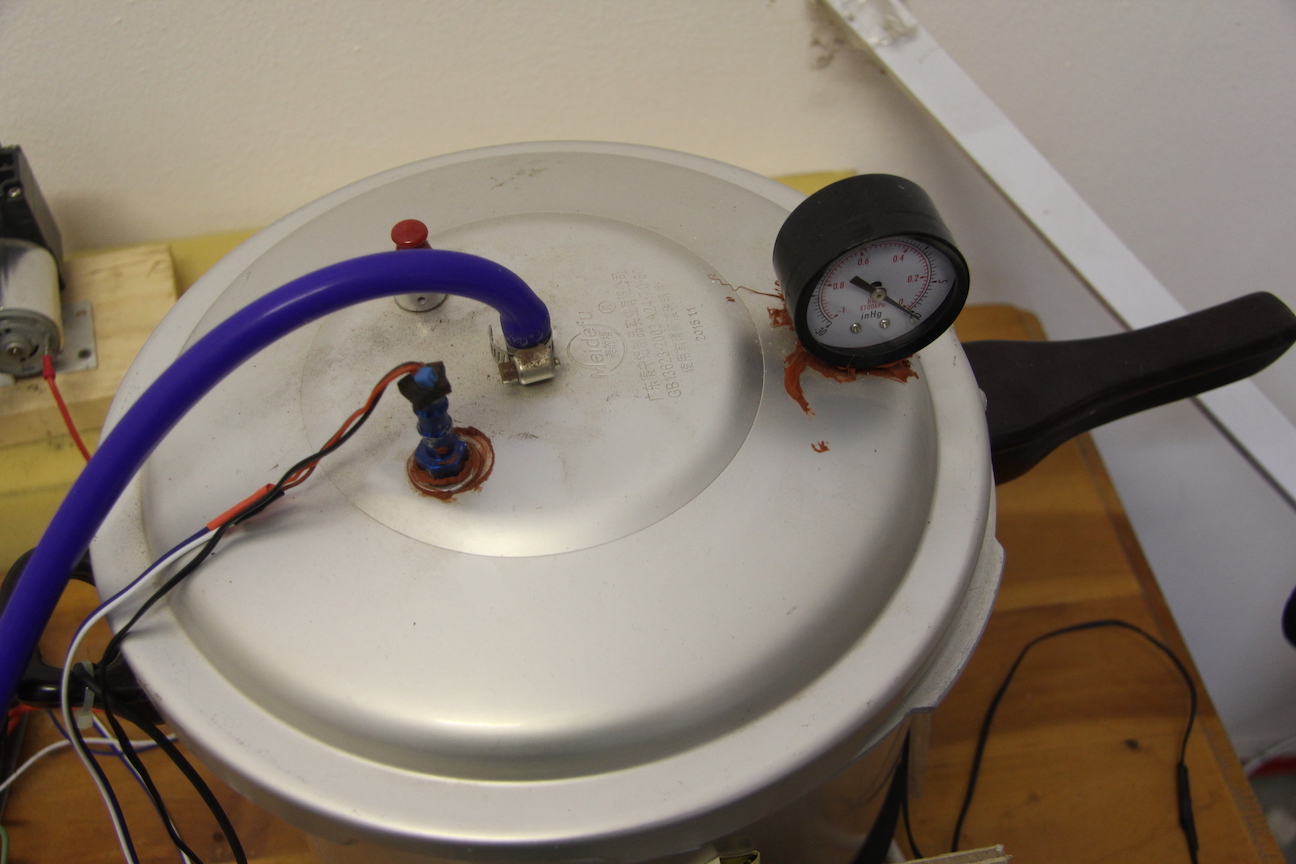 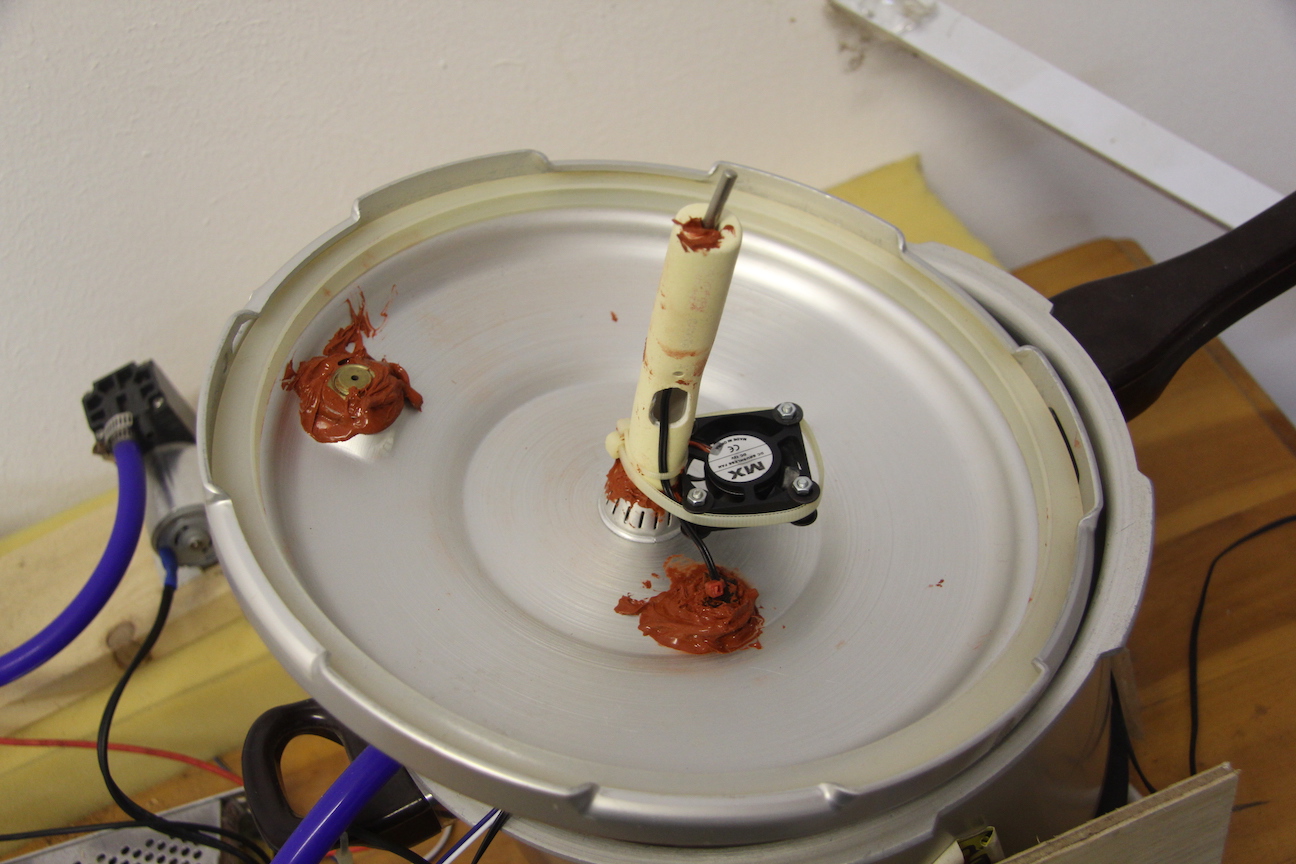 As can be seen above, there’s lots of silicone sealant plus I added a small 12V fan to shift the air around a bit inside the pot.  Also the internal temperature sensor can be seen at the end of the plastic tube. 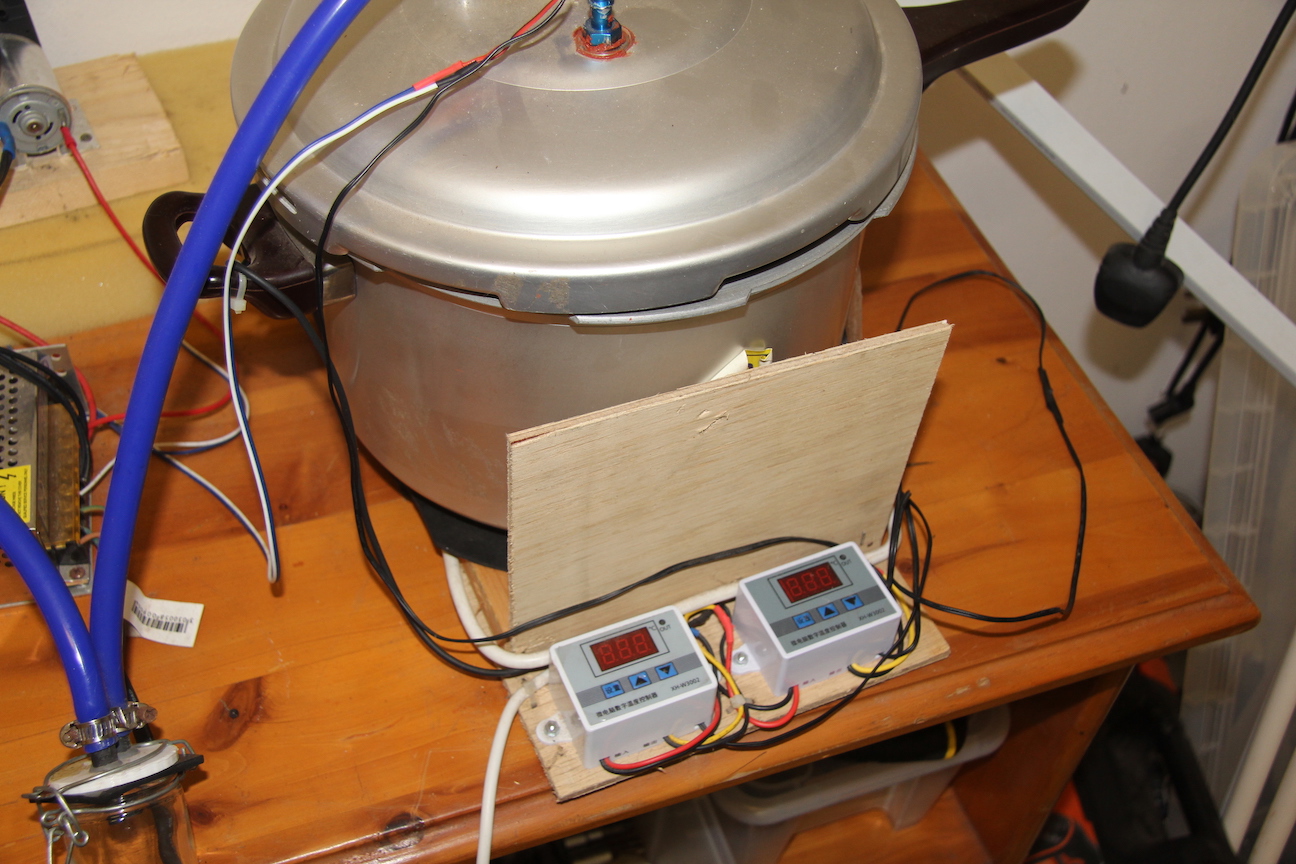 v2.1: After 6 months or so of use one of the thermostatic controls died.  Could be they’re just poorly made, but seems like they can get too hot next to the pot so added the heat shield shown in the photo above. 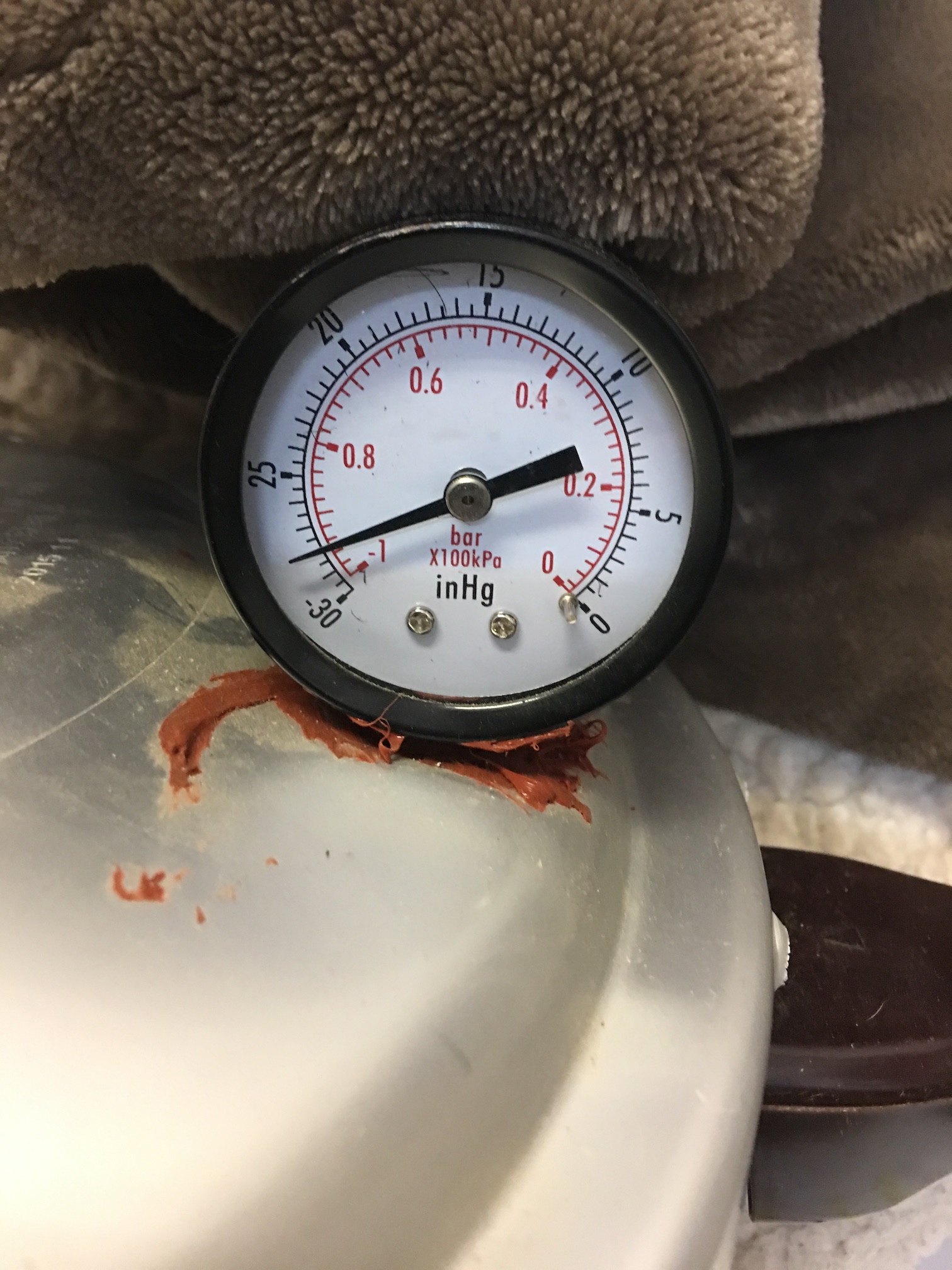 This would be the best vacuum I ever got.  around -0.85 bar is more common.

For filament I’d normally only get a few mls off a spool, but enough to make a visible difference in printing.  The volume above was from drying out silica gel.

Once you’ve built a vacuum dryer, the goal is to force water into the gaseous state at a temperature that will not melt your filament.

The boiling point vs. pressure information above was worked out from engineering toolbox and omnicalculator web pages.

As shown, the system can get sufficient vacuum to boil water even below PLA’s glass transition temperature.

Certainly you can dry filament in a regular oven at low temperatures at normal air pressure, but this should be more efficient.

For my use I stay about 10C below the relevant glass temperature in the table above for the max setting for the internal thermostat (as discussed above it creeps a few degrees above this) for 6 hours or so - I just leave it going until there doesn’t seem to be any more water coming out.  I have measured 0.2-1.0% change in weight for a 1Kg spool of PETG filament after 6 hours at 70C.  For silica gel I set it to 105C.